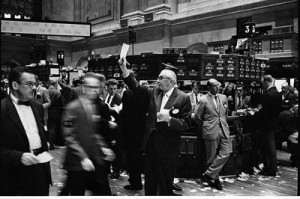 Forex currency market is a well-known financial environment, which is part of the world financial market. The key factor of its popularity is the cash flows arising on a daily basis on Forex and, consequently, the possibility to participate in any way in their redistribution. However, this requires an understanding of the nature of forex and the laws under which the market operates. The formation of the latter is a rather complicated process, closely intertwined with the history of Forex in general.

The first prerequisites for the emergence of the Forex market emerged in the seventies of last century. By that time, the current gold standard had demonstrated that it did not meet the requirements of developing countries’ economies. The onset of the Bretton Woods crisis worsened the situation – the leaders of the countries were forced to replace the current Bretton Woods agreement with a currency system based on the free currency conversion model. The consequences of these events were quite predictable – fluctuations in exchange rates between different currencies, the impact of supply/demand on the value of the currency and, as a result, the emergence of a new field of activity – currency trading. Although at that time, the formation of the modern Forex market was still quite far away. After all, the very notion of Forex – foreign exchange market – implies currency exchange at free prices, which before the official refusal of all the countries-participants of the IMF from the gold standard was impossible. The official refusal is dated 1978 – this date is considered to be the date of occurrence of floating rates and origin of the main feature of the currency market – currency exchange at free prices.

It is worth noting that in the process of market formation the concept of Forex has undergone a number of changes. In particular, in the English-speaking environment the world currency market is called forex, while in the Russian language the scope of this concept is significantly narrowed. For the Russian-speaking population, forex is associated exclusively with speculative trading, which involves commercial banks or dealing centers. The concept of “market” also does not reflect the essence of the forex market, as the world currency market, unlike any other, familiar to the modern man markets, has no territorial affiliation. It is a virtual environment of interacting currency markets in different parts of the world. Forex trading participants are: central and commercial banks, foundations and transnational corporations, currency brokers, individuals and currency exchanges.

I would like to mention another component of the financial market that develops in parallel with the forex market and operates on similar principles – the stock market or securities market. If one of the participants in the foreign exchange market is the currency exchange, the organization providing normal conditions of securities circulation for the stock market is stock exchange. The largest stock exchanges at the moment are: London Stock Exchange,New York Stock Exchange and Tokyo Stock Exchange.

While the formation of the international currency market has already reached its logical conclusion, it is impossible not to mention that the history of Forex creates the prerequisites for dynamic development day by day. As one famous trader said, “The market is a living organism, it is alive!” and, accordingly, its development is unlikely to stop soon.