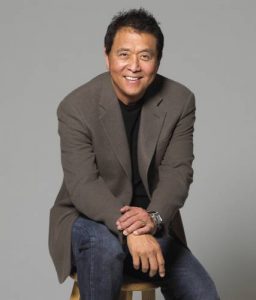 Robert Toru Kiyosaki, an entrepreneur and investor and one of the most famous people in America, has chosen teaching as his life vocation. Maybe it was because he was born into a family of teachers and his father was the Hawaii State Secretary of Education.

Robert began his business career at the age of 30 and by 47 already became a millionaire. After that, he directed all his efforts into educational activities. As a springboard for this lesson, Robert chose the financial sector, however, he did not focus on the audience of investors and financiers, but on ordinary people who were trying to optimize the management of their finances.

In his books Robert Kiyosaki tries to explain to people the principles of proper management of their own finances, which serve as a foundation for the accumulation and growth of capital. He’s also the creator of Cashflow 101, a board financial game which uses simple examples to illustrate and explain the application of various financial strategies and capital management principles. Previously, this kind of knowledge was akin to classified information, which rotated only among rich people and was passed on from the father to children. Robert Kiyosaki made this knowledge publicly available.

His other merit is the creation of the Rich Dad`s Organization in 1985 whose branches have spread around the world in a short period of time. This organization now has several million students. Its purpose is to improve financial literacy of people, disseminate and promote the basic principles of capital management. At the same time, Robert asserts that since childhood we have been laying down wrong principles of financial management – schools and other educational institutions bring up workers in their students, who depend on money and spend their lives on their earnings. In fact, it should be the other way around: “Either you manage your finances, or you dance to their tune for the rest of your life. You’re either the master of the money or the slave of the money.